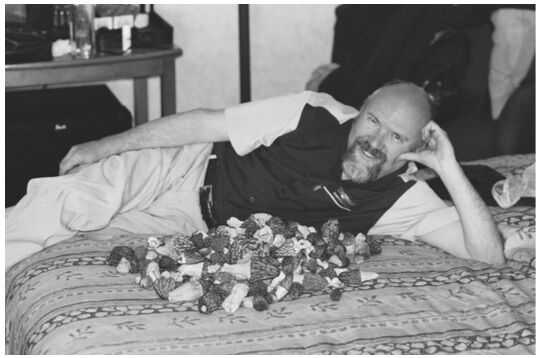 There were three of them. They wore leather and ballistic nylon garments reinforced with strategically placed body armor. Mounting their motorcycles they fired up their machines in a cacophony of deep staccato blasts emanating from large powerful engines. Turning onto the roadway they were off to a weekend raid of the small mountain town.

Their ride started across a mountain pass with riders and machines leaning deep into each corner carving graceful lines through the canyon in a deviant dance of speed, gravity and centrifugal force. Through rain, hail and high winds the three riders pressed onward at speed in the manner of
tarmac hooligans. Left behind were the masses trapped within 4-wheeled cages and miles and miles of asphalt. A second mountain pass was crossed and the three riders descended into the mountain town of Steamboat Springs. And so began this riding and mushroom raiding adventure for CMS members Norm Birchler and Bill Windsor and their friend Sushi Chef Keizo Aoi.

Food and Micro-Brewery drinks were enjoyed that 1st evening and afterward Keizo and Bill rode out along a rough and dark dirt road to take in the pleasures of Strawberry Park. The pools of these natural hot springs have some of the highest temperatures in Colorado and are a fine place for a motorcycling mushroom marauder to release the muscle tensions of a long dayʼs ride. Norm on the other hand, retreated to the Inn, where he experienced a chance encounter with a Chef preparing to serve Morels. Seeing such a well prepared prize, Norm enquired of their origin. He followed a guarded pathway of information from the chef to the picker and eventually elicited that the site had been a burn zone that
yielded many morels.

A challenge was put before the chef. “If we were to bring you Morels, would you prepare them for us?” To which Chef Ben Hunt responded, “Bring them and I will cook!” Norm spoke of this to Keizo and Bill when they returned, and together they pondered how they might find a similar place to plunder. To this Bill responded with conspiratorial smile “I know of such a place.”

Early the next morning, the three riders mounted their bikes and ventured out of town. They crossed a wide valley that seemed to run forever and then towards yet another mountain range. Many miles of asphalt were traveled and then upon entering the mountains additional miles of dirt roads were ridden. Ominous thunder storms were encountered and passed and then with tires sliding across the loose dirt of the road, the secret site was found. The bikes were parked and the three riders entered into the carbonized forest. Surrounding the riders was a landscape of burned disaster. A tangle of burnt trees lay scattered upon the ground fallen by fire and wind. Burnt limbless trunks that were still standing looked like gigantic blackened toothpicks stuck into the hillside. The three began their search for the prize and for a while the prize eluded them. Then Keizo called out “I have one!” A while later another morel was found by Norm and then another by Bill. A pattern was discerned, a pattern that was very different from fruitings within a growing forest. The hunt was altered to fit the pattern. Morels were found, many morels. The count passed 50 morels, then 100 morels. 150 morels were sacked, and the findings continued. 200 morels were picked and packed and still the findings continued until at last with 230 morels their bags were full and no more could be carried.

All of the morels were found in a 2 hour period and all were found within 1/4 mile of where the three riders entered the site. Reluctantly, the raiders turned away from the site and began the long ride back to Steamboat Springs. Energized by their bounty, the riding pace of their return was ʻsportingʼ to say the least. Speed Limits? Those were just numbers on a sign; num-
bers that happened to be much smaller than the numbers indicated on their speedometers. There were morels to be eaten this evening, morels to
be specially prepared for the three riders by Chef Hunt. Time spent traversing grey asphalt was not to be wasted by numbers on a sign. Upon return to the Inn, Norm presented about 30 morels to Chef Hunt. Chef Hunt had recently relocated to Steamboat Springs from Chicago and was now the creative force behind Rex’s Restaurant. Beer was consumed on the outdoor dining area while Chef Hunt prepared a special dinner to feature the morels. An appetizer of morel pizza with Gorgonzola white sauce was brought out an quickly consumed. The main dish was braised succulent roast beef smothered with morels and topped off with a red wine and shallot reduction butter sauce with a side of stuffed morels. The riders immersed themselves in friendship, mountain town ambiance, beer, morels and well prepared food. It was a royally indulgent evening to counter-balance the passionate focus required for motorcycling and finding morels. There are many ways to pass the time allocated to each of us and equally many ways to value that passage. For this writer, life does not get much better than indulging in the engagement of specialized skill sets and sharing those experiences with good friends.

Good Forays to you dear reader.

Epilog – I will speculate that there may be more than a few readers who are curious about the location of the burn site that produced such a yield and generated this story. Against my better judgment I will disclose that the burn site is located within the Western United States.

Mushroom Of The Month | Morchella

The Next Big Thing In Mycology | How To Play Your Role