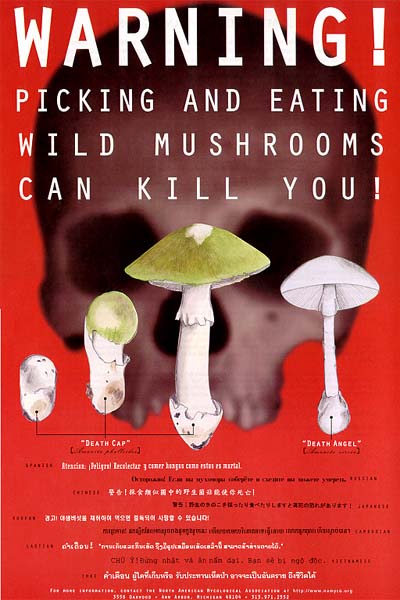 Since agreeing to chair the NAMA Toxicology Committee in the summer of 2003, I have scanned the over 1,700 reports of mushroom poisonings in the NAMA registry maintained since 1984. I have fully reviewed the reports for 2001, 2002, and 2003, which total 130 human cases involving 192 people and 23 reports of poisonings of dogs (involving 25 dogs).

The most striking aspect of all of the reports was how rarely a human died from a mushroom ingestion. Even people who ate one of the deadly Amanita species usually survived (though often with significant liver damage). In fact, the two cases of human deaths in Canada or the United States in the past three years where mushrooms were eaten shortly before death of the individual were not attributed to consumption of mushrooms, but were clearly due to other causes.

With dogs, there were eight reported deaths in the past three years. What was striking to me was that a dog could die within hours after ingesting a deadly Amanita.

The other surprises were that there are stinkhorns (Phallus impudicus or similar mushrooms) that can cause contact skin rashes just from handling them and that the juice from Omphalotus illudins/olearius may cause a burning sensation on the skin.

Tracking down mushroom poisonings involves a lot of sleuthing and a fair amount of guesswork. Often, no experienced mushroomer ever sees the suspect mushroom. Even when an individual studies a collection, it is often unclear whether or not the mushrooms examined were the same as the mushrooms consumed. Was there just one toxic mushroom mixed in with other edibles and no evidence remains of the toxic species? It is particularly difficult to get the dogs to tell you exactly what they ate or when they ate it.

On top of all of this, underlying disease may lead to lethal results with a mushroom that is not normally deadly. Excessive consumption of a normally edible mushroom can lead to ill effects due to the high levels of indigestible chitin and novel amino acids and other unusual compounds present in mushrooms. Consumption of raw mushrooms, undercooked mushrooms or mushrooms that have been frozen raw and then cooked can lead to adverse effects in otherwise edible species. A surprisingly wide range of mushrooms, including morels, can cause ill effects in some individuals if alcohol is consumed with or reasonably soon after the meal. Also, individuals can become sensitized to a toxin with repeated exposure; thus, after eating a mushroom several times, additional meals of the mushroom can lead to poisoning.

Finally, dogs (and rarely cats) are attracted to mushrooms, presumably by the sometimes fishy odor or odor of rotten meat in some species. Pets may eat as much as a human, but with their small body mass, they can suffer lethal effects from mushrooms that are only very rarely, if ever, deadly with humans. also, with dogs the mushrooms that contain a-amanitin and similar toxins can be lethal within hours of ingestion; whereas in cases of human toxicity, onset of symptoms is 12 hours or more, and death, if it occurs, takes a week or more. With pets, ingestion of Amanita muscaria, Amanita pantherina (and look-alikes), and probably some species of Inocybe can sometimes lead to death, while the same species are very rarely lethal in humans (and then only in humans with underlying infirmities).

There are a few general observations that I can now make about mushrooms and mushroom poisonings. Other than children and dogs, people rarely, if ever, eat small, thin-fleshed mushrooms. While many of these small mushrooms contain muscarine and some contain a-amanitin, they simply do not show up in the poisoning statistics (the one exception is Lepiota josserandii, which has killed both humans and dogs). Even though they are often large and abundant, Cortinarius species showed up only once in all of the reports, and then it was in a mixed ingestion of old rotten mushrooms, none of which should have been eaten in the first place. Since a few Cortinarius species may be deadly (with a very long onset of symptoms), I was surprised at their nearly total absence from the reports. conversely, I was struck by the large number of poisonings due to many different species of morels. Some morel poisonings involved consumption of alcohol, some involved raw or undercooked mushrooms, but some involved fully cooked, choice morels. It appears that a large number of people are sensitive to this mushroom. However, I was also surprised about the number of people who ate morels raw and were not poisoned.

Nearly all of the choice edible mushrooms appeared at least once in the poisoning lists. These reactions are attributed to food sensitivities. Boletes, especially Leccinum species, accounted for more than their share of poisonings by mushrooms generally considered to be edible. Even though I have never been adversely affected by Leccinum species and have eaten them a lot, after noting the number poisonings, the intensity of the symptoms, and the long period of feeling poorly, I believe my days of eating them may well be over. My colleague Marilyn Shaw has convinced me that we are not dealing with just a food sensitivity here. The questions include 1) are there several toxic Leccinum species, and/or 2) are we dealing with mushrooms that contain variable levels of toxins and so sometimes will cause poisonings and sometimes not? These questions remain to be answered. So far, I am not aware of any voucher specimens of specific Leccinum mushrooms that have caused a poisoning, and getting such vouchers in the future will help answer some of these questions.

Speaking of bad trips, the poisoning case reports also contain a steady supply of poisonings of teenagers (and occasionally old hippies) who consume hallucinogenic mushrooms and suffer anxiety and other ill effects from bad trips, contaminated mushrooms, and/or misidentification.

Compared to going out and randomly eating plants in the woods and in flower beds, eating wild mushrooms is quite safe. Only about 10% of the poisonous species are potentially deadly. Plant toxins are far more common, more often deadly, and generally much faster in their action. The difference is that people usually do not go around randomly sampling plants growing in flower gardens or in the wild, while they do eat mushrooms that they have not identified and may not even have a clue as to how to properly identify. They also eat mushrooms that are spoiled, where plants in a similar state of decay would have been discarded. At the same time people tend to be more generally terrified of eating mushrooms. Thus when the effects are unpleasant, the consequences are often modified by feelings of panic, especially among populations of people from Eastern Europe and Asia where, unlike North America, deaths from mushroom poisoning are not uncommon.

My Web site, www.evergree.edu/mushrooms, which includes a section on poisonous and hallucinogenic mushrooms, and other Web resources are sometimes used by people trying to identify a mushroom implicated in a poisoning. I created my site hoping to assist medical personnel in identifying mushrooms involved in a poisoning case, and to give people some idea of what to expect in specific poisoning cases. The problem is that doing identifications just from a picture is a challenge, especially for someone untrained in mycology. What we need are more people trained in mushroom identification who are willing to help out in mushroom identification for poisoning cases and file reports on mushroom poisonings that come to their attention.

To aid interested mushroomers, forms and information about mushroom toxicology can be found on the NAMA Web site, www.namyco.org. My hope is to get more members of the mycological community involved in identifying and reporting mushrooms involved or suspected in poisonings so that we can have an ever better understanding of any risks associated with mushroom consumption and so that we can better educate the general public.

What do members want to see?