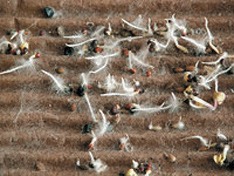 What is a Life Box and who is Paul Stamets, anyway?

Our friend, and colleague, Paul Stamets, probably one of the most creative persons I’ve ever known, has come up with a very exciting new idea, Tree Life Boxes. He has been active in various aspects of the field of mycology since the mid 1970s. He is the founder/owner of Fungi Perfecti and an innovator in mushroom cultivation. He has also developed the use of fungi in mycopesticides, and in mycoremediation of toxic wastes. His is prob- ably the most widely known name in some of the more-or-less esoteric aspects of mycology.

What is a Life Box? It’s a very ordinary looking corrugated cardboard box, but hidden inside the corrugations are seeds of trees along with spores of mushrooms which form symbiotic relationships with those particular trees.

Why? Initially to be used as any other cardboard box would be used, but when that function is accomplished, instead of putting the box in your recycle bin, you can use it to grow a forest – well, at least some trees. Full instructions are included on how and when to activate the growing process.

Do read more about this worthwhile project online. Bear in mind that the Life Box is not yet fully available to the public, but already there are plans for other applications.

From lifeboxcompany.com:
“The Tree Life BoxTM panel is made of recycled paper fiber. In this fiber, we have inserted a wide variety of tree seeds, up to a hundred, dusted with mycorrhizal fungal spores. The mycorrhizal fungi protect and nurture the young seedlings. For mil- lions of years, plants and beneficial fungi have joined together in a mutually beneficial symbiotic relationship.”

“The Life BoxTM is a robust platform for creating guilds of plant communities. Here are a few we envision: 1) Garden Life BoxesTM, 2) Meadow Flower Life BoxesTM, 3) Grassland Life BoxesTM “The Life BoxesTM can have many forms and we can make them to practically any dimension. Here are just a few of the many that are possible. 1) DVD/CD mailers, 2) Pizza boxes, 3) Shoe boxes, 4) Sleeves for hot beverage cups.”

Also be sure to view Paul’s video, “Six ways mushrooms can save the world” on youtube.com., video.google.com, and a number of other sites. Can mycology be exciting? You betcha!

An Overview of Mushroom Poisonings in North America